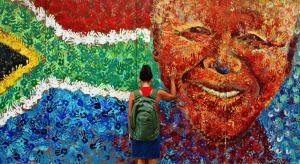 Five past five this morning I did what I have done each morning for the past three weeks – I opened Twitter on my cellphone and moved to Trends. The light from the camera hurt my eyes. The rest of the room was dark and all I could hear was the sound of the waves and an occasional car.

An unconfirmed report from some obscure overseas website that he had died. I moved to my own “trusted sources”. Topmost of the list: Barry Bateman @barrybateman . I love how he reprimands those who go crazy with the rumours.

I'm not going to comment on other publications and their sources, as well as rumour – it fuels speculation. I'll take my cue from Number 1

This morning he is joking around about how the journoes would pay for a nice breyani. So I relax. Nothing dramatic is happening.

I grew up a lily-white child of Apartheid South Africa. During the 70s we did what all white, Afrikaans kids did: we loved our country passionately, learned how to march around (one period a week; the guys got to learn how to shoot guns) and sang songs about the greatness of being of the proud race of “Voortrekkers” (similar, I suppose, to American pioneers).

My parents did a good job, though. They taught us about compassion and caring for others. I remember my mom telling me a long story about how we shouldn’t generalise or judge people based on race or culture. So I was more fortunate than most – I wasn’t actively brought up with all kinds of prejudices and bias.

But there is no way that I wasn’t a racist.

Because there was “us” and “them”. There was always a maid living in the maid’s quarters, eating from her own cutlery, using her own toilet; not sharing our dishes and never ever using our toilet.

And nine o’clock at night the big siren in town went off – curfew for all the “Bantus”. After that the yellow police vans started their nightly patrols in the suburbs to scoop up all black people who were still out and about. Every so often they would raid someone’s house – would burst into the yard and storm to the maid’s quarters. Because a maid might have permission to stay there, but her husband/boyfriend/brother/auntie/child was definitely not allowed. They didn’t have the right papers to be in a white neighbourhood at night. They were arrested and dragged off to the yellow van.

I was totally isolated from what was really going on in the country. Like so many children of my age, I simply didn’t know any better. In fact, I remember having exactly one English-speaking friend – a rare and valuable oddity in our Afrikaans community.

But even in my little white cocoon, light slowly filtered in. I heard that the song “The seagull’s name was Nelson” might have some or other obscure meaning and I shouldn’t be singing it. That scared me a bit, being a “good Afrikaner girl”, but I never knew some people played it to show their support of Nelson Mandela. Not that he was a seagull – but it was the only way to “speak his name publicly” at a time where the Censure Board would ban anything and everything. Well, I didn’t know about Nelson Mandela. At all.

Somewhere in high school someone gave me a book of poetry. A BANNED book. I remember the delicious sense of being a rebel and a liberal. It was just some poetry from African poets. But I hid in the storage space where we kept the blankets when I read the book. And I was convinced that the police would burst through the doors at any moment.

In 1976 we were visiting my cousins outside of town when my uncle brought the first pictures I ever saw of a black township. The Soweto riots had started. Were started. By school kids. None of it made sense to me. What made them so angry? And what made it okay to kill kids? I never received answers. Unfortunately that meant that I stopped asking questions.

Somewhere in the 1970s and 1980s my life turned into a typical teen’s life. Worries about my skin, my weight, my marks, guys (or the absence thereof) and schoolschoolschool.

We now learned about identifying possible bombs in shopping centres (when we were not learning about the dangers of dancing, drugs and satanism). Our brothers and cousins were called up for mandatory army duty. They were sent to “the border” (between South West Africa and Angola) where they lounged around or got killed by terrorists. Soldiers (“troepies”) became part of our culture and our everyday lives.

University years were not much better. Our varsities and colleges were racially segregated. The only black people I ever met were the unskilled and semi-skilled workers in my house, at the garage and in shops. The white cocoon was cracking, but not much. The bombs in shopping centres and the terrorist attacks continued, but now in our neighbourhoods: in a bar, at a church service. Life was confusing.

And then things started happening. At high speed. Unbanning of political parties. Freeing of Nelson Mandela. First democratic elections. The passion and energy in the air excited me and made me nervous and happy, all at once. Many of my friends were quoting an old Afrikaner psychic and building up doomsday bunkers filled with water, weapons and baked beans.

But things changed, whether they liked it or not. And suddenly, strangely, things were totally different. My boss was black (how weird was that!). Our President was black (but very nice – and a rugby fan to boot!). Our Afrikaner teachers were suddenly twisting clumsy tongues into knots in an effort to teach in English to the blackwhitecolouredindianasian faces in front of them (how funny were those sounds).